Adapting a book into a movie is tricky business because comparisons both negative and positive are imperative. ‘The Dry’ is a long-awaited 2020 Australian mystery film based on Jane Harper’s book of the same name (2016).

Roadshow Films released the movie last year in Australia on 1st January 2021. The movie was well-received by critics. Reports say that IFC Films will be releasing the same in the United States today. Unlike before, when a movie release would mean a countrywide release in theatres, things have changed quite a bit now. So, there arises the question, How exactly can you watch the film?

Before we go into those details some background info about the film. Jane Harper’s book was a bestseller, and the movie is bound to do good despite the fact that most of us know what happens at the end.

The movie is scripted and directed by Robert Conolly and produced by Bruna Papandrea and Reese Witherspoon. The film features Eric Bana as the protagonist, Federal agent Aaron Falk. Genevieve O’Reilly and Keir O’ Donell also star in the film.

Before the pandemic caused devastation across the whole of the world, Australia, suffered an unusually hot 2019-2020 bushfire season. This period was known as the Black Summer, and 18.6 million hectares went up in flame, killing hundreds of people, destroying thousands of homes and businesses, and burning down nearly three billion animals alive.  Robert Connolly’s The Dry is a small town Australian murder mystery set against the backdrop of this drought.

After over 20 years, Aaron returns to his drought-stricken hometown Kiewerra(fictional), to attend the funeral of his childhood friend Luke. It is assumed that Luke killed his wife and son before turning the gun on himself. Somehow he had spared his baby.

Luke’s parents, who are shaken up by the deaths of their family members, request Aaron to stay a little longer and look into the case without getting formally involved. Aaron’s return brings back to memory the old mystery surrounding the death of a teenage girl with who he was romantically involved.

Dry’s screenplay mostly stays true to the book except for few cases like the casting of Eric Bana (who has a very different personality) as Aaron when compared to the bookish version of the character. Fortunately, the story plays out more like a crime thriller instead of a Gothic drama. The movie has got an IMDb rating of  7/10, and  Rotten Tomatoes has given the movie a 4/5 rating. 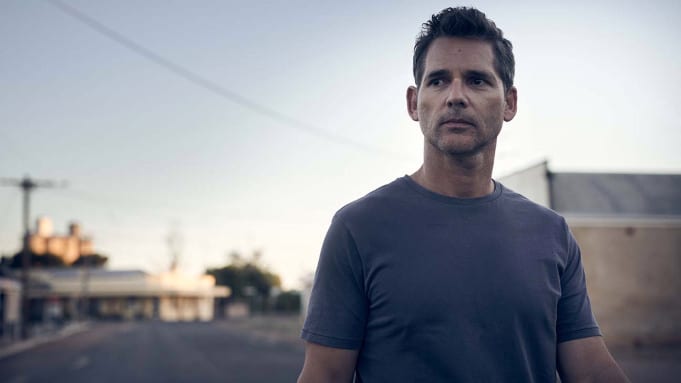 Going back in time

The film has beautifully shot flashback sequences interspersed by the present happenings. The flashbacks showed the town when it was still filled with greenery and the river was a favored spot for swimming.

Avoiding the usual elements that are used to depict life in Australia, the film takes a different approach and still gives you the feel of the place. The drowning of Ellie, a troubled teenager who was drawn to both Aaron and Luke in the river, left many unanswered questions and made the locals kind of hostile towards Aaron.

So eventually, Aaron had to leave the town. Coming back to the same place after 20 years leaves him both nostalgic as well as troubled. It’s obvious in many ways that Aaron has become and is also treated as an outsider after being away from the town for two whole decades.

Bana as Aaron delivers a soulful performance. His conflicted feelings, his understanding of the deaths, both past and present are all portrayed beautifully by Bana.

Going by the themes that are dealt with in Harper’s book such as a secret gay relationship, child sexual abuse, addiction to gambling, questions about paternity, what could have been excuses for melodrama, are depicted with a lot of sensitivity owing to Conolly’s direction.

The Dry is available for watching in cinemas across the United States from today, 21st May. Those who don’t wish to go to a theatre and watch it on the big screen or can find it streaming on Amazon Prime. The film is being distributed by IFC Films. As of now, a UK release date has not been announced.

What To Expect From Gomorrah Season 4?